The Spring 2017 LMS data set referenced in this post is available for purchase.

Spring has come early this year, and so too has our spring 2017 LMS market share update. Our goal remains to be the best source of current data for institutional Learning Management System usage for US colleges and universities. LMSs used by individual instructors or for individual courses are not counted. We include pilot servers in our numbers but not sales demo environments. Where multiple LMSs are detected to be in use, a team of analysts reviews publicly available help desk knowledge base articles, RFP documentation, student newspapers, social media, and other publicly-verifiable sources to inform how we count each LMS. When a school definitively stops using a LMS to teach classes, we remove it. We have also removed over 100 colleges and universities from our data set that have ceased operations over the past year. For-profit schools (notably those accredited by ACICS) and smaller schools are disproportionately affected.

Since last fall, the most significant overall trend is that fewer schools are running multiple LMSs. This continues the trend of consolidation first noted in our Fall 2016 report. For a period of time, the number of schools running multiple LMSs appeared to be increasing, and we now believe this was because many schools chose to run two LMSs in parallel while migrating from one to another. We are now seeing switch-overs that happen more quickly than in previous years and a more-rapid decommissioning of legacy LMSs.

There are now only 16 unique ANGEL installations in our data set accounting for 34 schools. Penn State is the largest remaining multi-campus ANGEL environment and will fully support ANGEL through summer 2017 after which the school will standardize on Canvas. Almost all schools still running ANGEL have a clearly identified replacement LMS at this time.

For a period of time, schools migrating from ANGEL to Blackboard Learn (following Blackboard’s 2009 acquisition of ANGEL) steadily increased the total number of schools using Learn. This trend is now coming to an end. Because of this, and the shutting down of Learn environments following prolonged migrations during which 2 LMSs were run in parallel, there is a noticeable drop in the number of schools running Learn for this update.

D2L continues to have a steady and ever-so-slightly-growing presence with its Brightspace learning platform. Save only a handful of self-hosted schools, almost their entire customer base is now running the latest versions of its product. There has been tremendous progress made in this regard over the past year.

During this past quarter, Canvas has definitively become the #2 LMS in US higher education, overtaking Moodle in terms of both number of institutions and student enrollments. Incredibly, the organization has even slightly increased its rate of new adoptions when comparing data over the past year.

Moodle experienced an unexpected drop in institutions since last fall. Of those schools that switched LMSs from Moodle to a different LMS, 1/3 were hosting with a Moodle partner, and 2/3 were self-hosted. 2/3 migrated to Canvas, 7% each to Brightspace and Blackboard Learn, and 2 institutions ceased operating. Several schools consolidated from multiple LMSs to standardize on one LMS and discontinued Moodle as a supported option.

Despite this finding, there are still schools that are switching in the direction of Moodle. Bramson ORT College, for example, appears to have become the first institution in our data set to use the new MoodleCloud hosting option offered through the Moodle organization, having switched from self-hosted Blackboard Learn.

Sakai’s institution base has shrunk to its lowest level yet. However, most remaining schools seem to be committed to the product based on the version numbers in use; they reflect some of the most recent Sakai versions released. Of colleges who switch from Sakai to another LMS, California-based universities, and in particular those using the Sakai-powered Etudes LMS, are currently most correlated with switches to Canvas.

Pearson continues a rapid and responsible exit as a LMS vendor with most schools continuing to switch to either Brightspace or Canvas.

Most new usage of “other” LMSs has come from smaller schools switching to or standardizing on the Jenzabar eLearning LMS that is integrated with their SIS solution. The newest entrant that we’ve seen in our data set is NEO LMS which in this update replaced a Moodle installation, formerly hosted by The Learning House, at Iowa Wesleyan.

The complete US LMS data set referenced in this post is available for purchase.

For the fourth time, we are excited to provide data relating to the use of Learning Management Systems in the US, Australia, Canada, and the United Kingdom. Since this project began, we are humbled by its mentions in industry publications, citations in academic journals, highlights in conference keynotes, and in particular – because of our original mission to inform technology selection practices at higher education institutions – the many references in LMS review and decision-making materials that we’ve come across.

Each Fall provides an opportune moment to update our findings because this is typically when higher education institutions have implemented any LMS changes for the new school year. As a reminder, the primary focus of our work is US higher education institutions, as listed in the Department of Education’s IPEDS data source, with more than 500 students. This year, our goal was to refine this data set to better reflect which LMSs these institutions are actively using. For this reason, we have removed LMSs that appear to be evaluation or demonstration sites (or otherwise not in active use; we do, however, continue to include pilot LMSs being actively used by students and instructors). Where there has been uncertainty, we have relied on social media, listserv postings, press releases, student newspapers, IT support and help desk articles, faculty senate minutes, RFP documentation, and other publicly-accessible, verifiable records to validate and confirm this data. In addition, we have removed the growing number of colleges and universities that have closed their doors since this project began. This has disproportionately impacted smaller and for-profit institutions.  The goal remains to count those LMSs in broad use by each active institution, and this year we also exclude “zombie LMSs” where the LMS lives on even though the institution does not. Here are our findings.

US higher educational institutions continue to consolidate onto 4 primary LMSs: Blackboard Learn, Instructure Canvas, Moodle, and D2L Brightspace. Vendor hosting and cloud-based/SaaS solutions are becoming more common, and as a result more institutions are running LMS software that is more up-to-date. Though many schools still run more than one LMS, fewer schools are choosing to run more than one LMS following an LMS migration effort. Finally, schools are increasingly migrating more quickly off of LMSs that have an approaching end-of-life (EOL).

While our initial report indicated additional installations of Learn SaaS, we admittedly misunderstood the official definition of “Learn SaaS.” After clarification from Blackboard and cross-referencing this documentation, we now believe that we’ve detected Learn SaaS being used in a production configuration by 7 institutions. In addition, we have observed encouraging improvements that indicate Blackboard has moved towards a continuous delivery model of Learn releases that allow the organization to align its on-premise, hosted, and SaaS product lines. We also learned that there were efforts to create an Ultra theme for Learn 9.1 installations. While certain artifacts of what was supposed to be Ultra do appear to have shipped in legacy versions, only Learn SaaS officially supports the true, new Ultra user interface. (Updated 10/10/2016)

To make a valid comparison to our earliest data, we consider only those schools with more than 2000 students. When doing so we see that Canvas is growing significantly, D2L is growing slightly, Moodle and Sakai are shrinking slightly, and the usage of ANGEL and Other LMSs (in this graphic including Pearson) is shrinking moderately. Finally, while Blackboard has experienced a dip in usage for schools with more than 2000 students, they have added to their installed base when including all schools down to 500+ students suggesting a higher proportion of their growth coming from institutions having 500-2000 students. This makes sense, as many lagging ANGEL institutions are of this size and over the past year have migrated to Blackboard Learn. 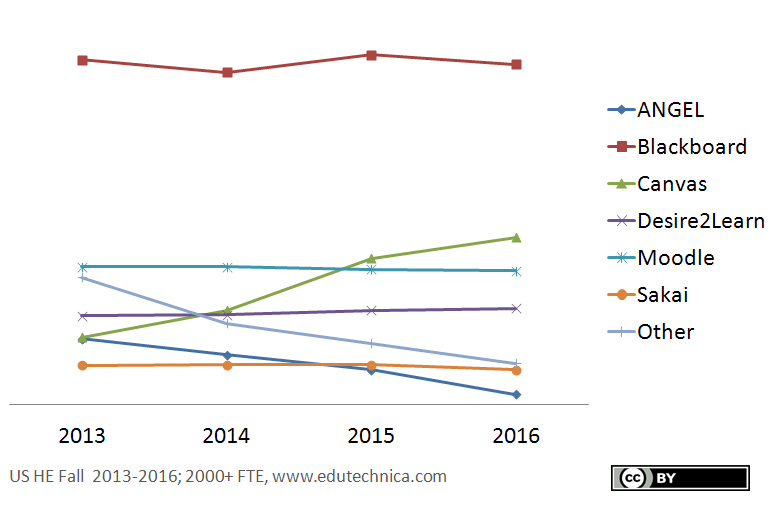 While much of our research focuses on US higher education, this year has also seen some LMS shifts on a global scale. For this analysis, we have used this list of “Australian Universities” from the Australian Government Tertiary Education Quality and Standards Agency, this list of universities from Canada’s Department for Employment and Social Development, and this list of institutions designated as universities by the UK Department for Education to perform analysis similar to that undertaken in the United States.

What we found is that Moodle remains the most popular LMS in Canada and the UK but strangely not in Australia where it was invented. D2L Brightspace continues to be the most popular commercial LMS in Canada (where the company is based) with Canvas receiving only limited traction. While Canvas has had its most success growing a small cohort of universities in the UK, the company continues to experience higher education growth challenges outside of the US in these countries. Finally, Sakai has all but disappeared from Australia as an institutional LMS over the past year although it is still used by some institutions for research collaboration or other non-LMS uses. 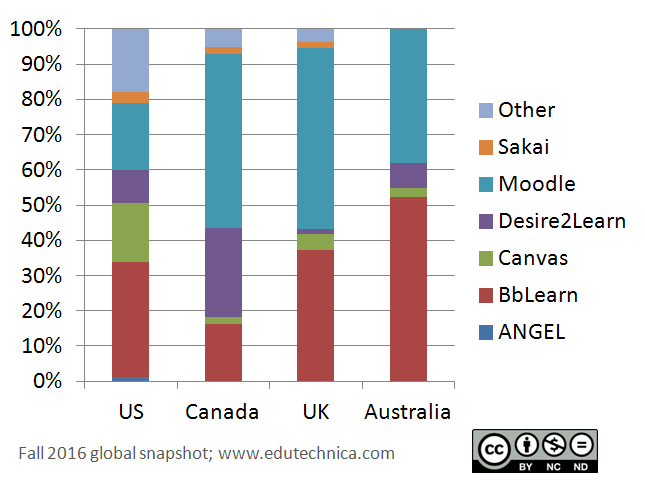